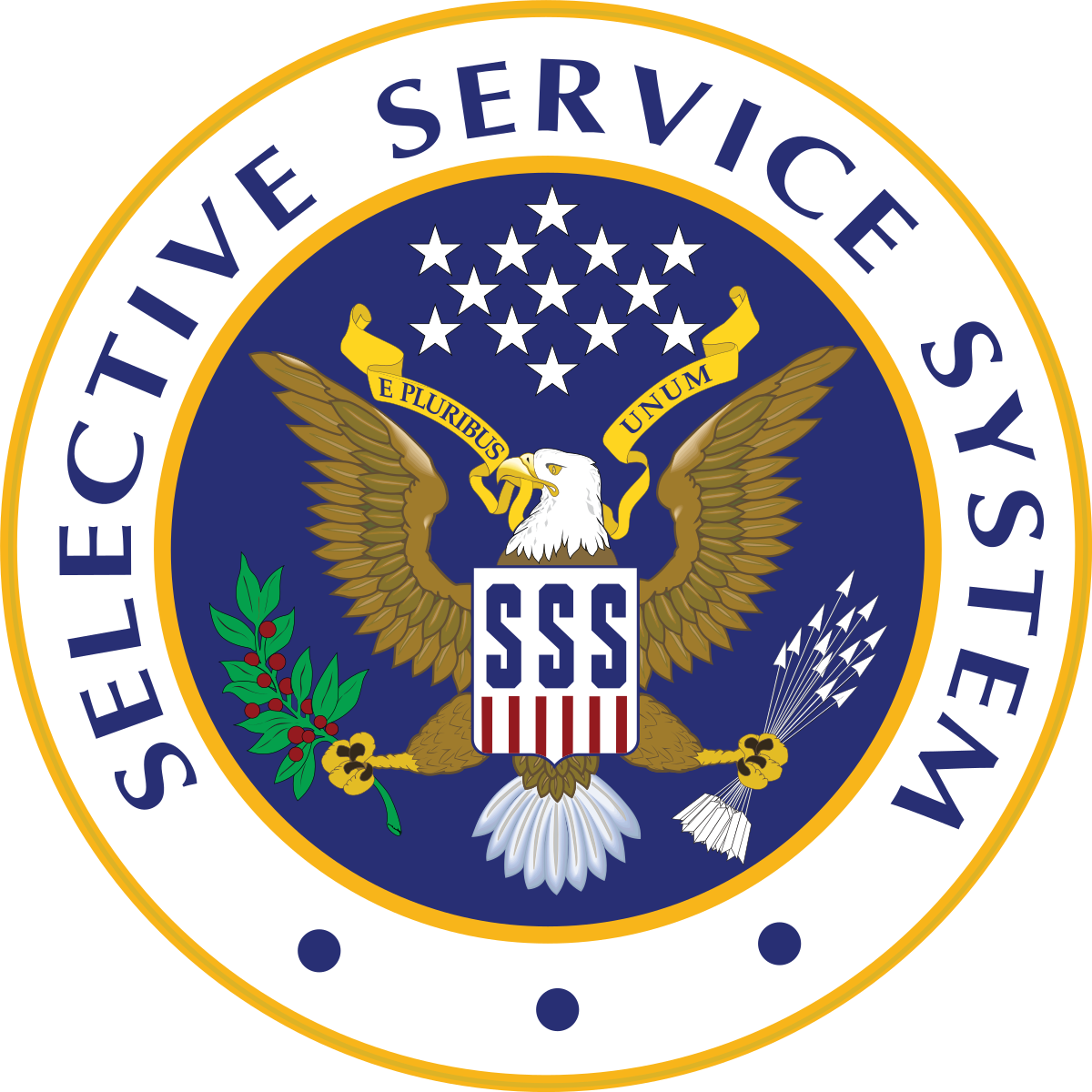 The Selective Service System is an independent agency of the United States government that maintains information on those potentially subject to military conscription (i.e. the draft). All male-at birth U.S. citizens and male immigrant non-citizens, who are between the ages of 18 and 25 are required by law to have registered within 30 days of their 18th birthdays, and must notify Selective Service within ten days of any changes to any of the information they provided on their registration cards, such as a change of address. In practice, the selective service system has minimal practical effect today since the U.S. military operates on a volunteer basis. Nevertheless, it is seen as a contingency mechanism for the possibility that conscription someday becomes necessary again. -Wikipedia

It's what came to mind as the chapter and new book opened. I can remember standing at the post office in my village when I turned eighteen, and filling out the selective service card. It was the law, and we were told that if we did not we might be ineligible for federal student loans. In the end not only did I need the student loans, but I also signed up for Air Force ROTC, but perhaps that's for another tale.

In the opening of the Book of Numbers (Bemidbar) we get a head count and a reminder of each tribe and its tribal responsibility, and place in the camp. I pondered the tribes and where we all fit into the scheme as I read it. I know and grew up with a family who were from the Kohanim. At my present shul I know Cohen's and Levi's and so see them receive their tribal honors.

I travel, and always check in and seek out the Jewish world wherever I go. As such I'm often enough asked if I'm a Cohen or a Levi, as the honor of first aliyah is still universal. But for most of us the notion that we belong to a particular tribe of the twelve has been lost to history. We are all Judah, we are all Jews right now, and that's enough.

Today I was home, and it was our annual meeting at the shul. Our president, who is wonderful, injected something into her address that was fresh direction from past presidents. She chose words from our community siddur. We are a merged congregation, and one of the steps we took was actually producing a unique siddur that fit our needs. Part cure for the residual enmity, but also a concrete statement of who we were now, and a great recognition of our commitment to our faith and will to be contemporary, practicing Jews in the new century.

Each of us enters this sanctuary with a different need....May we, in our common need and striving, gain strength from one another, as we share our joys, lighten each other's burdens, and pray for the welfare of our community.

May the door of this synagogue be wide enough to receive all who hunger for love, all who are lonely for friendship. May it welcome all who have cares to unburden, thanks to express, hopes to nurture. May the door of this synagogue be narrow enough to shut out pettiness and pride, envy and enmity. May its threshold be no stumbling block to young or straying feet. May it be too high to admit complacency, selfishness and harshness. May this synagogue be, for all who enter, the doorway to a richer and more meaningful life.

These words we borrowed for our siddur from various places in the Jewish liturgical world have always meant a lot but become more meaningful as we pass each year. She proclaimed her desire that our shul be the sort of place that anyone seeking to live a Jewish life might find a home and that folks of a more, or a less traditional outlook or style of worship would all be welcome to come and live that Jewish life together. That we would continue to embody the idea of a family with all its various components.

As another chair spoke for his committee (which was carried over from one of the parent synagogues) he slipped and said our joint name, and joked that perhaps this was the sign that it was over, that the graft had taken, and that we were finally new growth on the roots of our past.

I thought of the tribes, and my traveling and how well we are doing this thing called Judaism. I see Jewish life in various stages. Small congregations holding on. Congregations that could look past ideologies to larger goals and grow together. Congregations that dwindled and only left buildings and cemeteries behind in the wake of time.

Soon in our weekly reading we'll get to the offerings of the tribes in Numbers. And while there is some debate about how this should happen, it seems G!d wanted each tribe to be recognized individually. Princes of the tribes all come in order yet they all bring the same offering. A display of the equality before the lord. But then they bring six wagons and twelve oxen. Two princes a wagon and one oxen each?

Reading a Lubavitcher perspective on these words of Torah I found our shul president's message again.


One approach is to focus on our “interdependence”: to appreciate that since we share a common goal—namely, to build for G‑d “a dwelling in the physical world”—and since we each have a crucial role to play in the achievement of this goal, our various “tribes” and types complement and fulfill one another to create a single people. In other words, our differences themselves are what unite us. Since the entity “Israel” and what it stands for would be incomplete were any one “tribe” missing from the equation, no Jew is fully Jewish without his relationship with every other type of Jew.

We came together today, not just to be counted, but to be counted on by each other. A community that is rich in its gift of individual commitment to the living laboratory of Jewish life the world sees as only a building on the west side of town, but for us is so much more.

Check in with your Jewish community and say hi, be counted.