Shoes of the fisherman 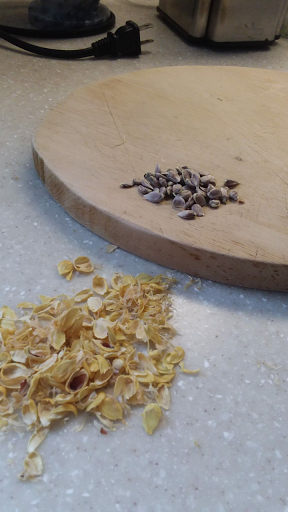 There is this movie adaptation of the novel, Shoes of the Fisherman starting Anthony Quinn. He's a former bishop stuck in a gulag by the Soviets as the movie opens and ends up the Pope with his former captor needing his help. The world is on the edge of a crisis and a possible nuclear war with China and the USSR.
A younger member of the Soviet party disappointingly chides the premier when he decides to call on Quinn's character for help. "What has happened to you, turning to Roman magic...," And the premier replies, "what happens to everyone who sits in the center chair, I have come to the end and I am all out of mathematics."
The premier sends a gift to the pope, a man he knew as a prisioner he helped brutalize years ago. Sunflower seeds and soil from Ukraine arrive with a message.

"the seeds are sacred for the life locked within them, the soil because it is all we have to stand on."

This crossed my mind as we readied an etrog from last years sukkoth. We saved it to plant and now on the crossquarter day, between winter solstice and vernal equinox it was time to start seeds.
In a world that keeps threatening to tear itself apart, people are held hostage and paralyzed. In world that would make itself treyfish rather than talk to each other we need to take time and remember the pregnant beauty of possibilities in the seed and goodness of the common ground already under our feet.