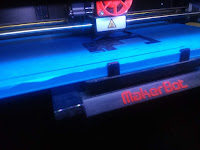 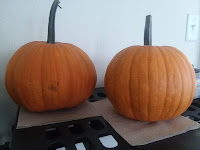 I've been working with the local Makerspace of late to produce some items. They have a few 3D printers and several other machines that are to expensive and singular for everyone to own a copy but at the same time remarkably useful.

At breakfast this morning I was thinking of the stuffyness of our lives. We're surrounded by stuff. Humans make and use it, collect it, trade it, we are a stuff culture especially in America or perhaps "the west." It's a culture that was fueled by 19th century mechanization and capitalism that has taken jabs since the beginning but perhaps most famously in my lifetime by Charles Schultz in his comic Charlie Brown. Consumerism is demonstrably not the way to go, but there are things we need and want in our lives.

We garden, it's an old tradition that both our families came from. Perhaps as we're the grandchildren of immigrants, perhaps because we were brought up to enjoy the connection with the earth it brings. We have pumpkins on the shelf that grew in our garden this year. They weren't even planned, just a happy accident that came from the compost and was recognized early and transplanted and allowed to run the cycle.

Below the pumpkins is a set of nets we bought this year to keep the cabbage worms at bay. And looking at them and talking about the insects we sought to control with them we talked about the various troubles we've had and had a brief recap of what we'd been reading about them and mentally walking through some of the ways to control predation on our garden.

I said, "you know the garden is a makerspace." When I want to use the 3D printers I find a model which is a sort of electronic blueprint for a thing the machine can read. The machine then slices the model up and starts to give the slices to the printer to grow the item out of plastic a layer at a time. It made me think of the seed, and the beauty of the organic 3D model that was stored inside it waiting to be run.

Seeds were where I found the divine in the universe as a child. They were how I saw the hand of god on the earth.

This morning I reminded of Rav Fred Rodgers who asked that we, plant a garden in your mind.

Everything is a makerspace, from our imaginations where we conceive ideas to the physical world where we realize them. In the case of the 3D printer it's more complex than pushing a button or telling it what you want. We have to align many sub systems to make it work. You need to understand the software that you made the model in, the computer to read it, the input output link to the printer, the set up and alignment of the printer, the stock plastic that is being fed to the printer on and on. In garden you need to understand the seasons, the soil, the water, the plant you want to grow, the creatures that prey on the plants on and on.

We're not giving up on stuff anytime soon but our culture has come to understand that there is more to life than stuff and we're learning to deal with that. Our Makerspace is in the public library, a massive shared space and resource. Our technicians and librarians maintain the system so that we can all enjoy something to monumental to afford as individuals. The techs in the Makerspace understand that the best way forward is by sharing resource. Stuff isn't bad, it's how we make use of it. They have set out to encourage and provide a space for anyone with any skills that can be shared to do so too. It's changing the library from a bank of silent and fixed thoughts to a place of animated live thoughts.

Imagination and reality are not separated by all that much. We spend a lot of effort telling ourselves this is a fantasy or that is a daydream and all of it is a waste of time. I disagree, we need time to think, to dream, to cultivate that garden so that when we see an accidental pumpkin we know it and transplant it and nurture it to fruition.