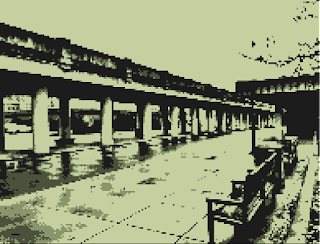 I love mass transit, I think mostly because I dislike driving but really I enjoy the security a mass transit system offers.

Today as I rode the bus home and then went over to the shul to work on some cables I was thinking about why I ride the bus, oddly enough. It's noisy, it smells funny and the folks that ride around here do so mostly because they have no choice in the matter and tend to be less thoughtful passengers when it comes to etiquette but generally they are a friendly crowd.

I walked into the rabbi's office and was greeted with, "come come, look at this I think you'll like it."

Our congregation's rabbi was working on a section of a new machzor for us. It was a section that was from Rabbi Zalman Schachter-Shalomi, (may he be smiling wherever he is) using technology as a metaphor. It was beautiful and I agreed, I did like it.

It led to talk on Reb. Zalman. I said I'm aware he loved technology, it comes through in his writing, he had a special excitement about it. I'm not sure he understood it all, but he was excited and I think that was because he had found a modern way to talk about some of our oldest issues. A way to make analogue for difficult spiritual concepts that really resonated with people.

I said, "that book you lent me on Zalman, he had questions I'd love to see the answers to." Our rabbi was like, "nu..." I said, "about the dishwasher and shabbosdike (a Zalman term)." I wondered if Zalman grew up in a home where it was normal to have things like dishwashers or ice-makers or other things we might think of as labour savors. I said are they eved, are they servants to us? Do they deserve rest?

I said I think we need to change how we conceptualize the tools in our home that do things like this. I went to my car. (Yes, I own a car and I ride the bus.) I said we need to not think about the work these machines do so much as the time they save and the cost of that time.

I said to my rabbi, "I can walk home from the city, it would take me an hour, or I can drive here in ten minutes. That means I have fifty minutes more to do something good with. My car is a time machine." This is how I've come to look at many of the labour savers in my life. I suppose I came to it from from something I read of Rav. Kook on a vegetarian life as ideal but I think it can translate.

My rabbi told me of a friend that refused to fly, citing the toll that it takes on the environment for the luxury. I am in agreement with this so long as we agree that there is a time and a place for such luxuries and we use them with intent. I am a vegetarian as well for the curious, but what I would stress is that we should be living lives of intention. Humans have such a gift for problem solving, to be observant is in our nature, but to observe ourselves in action sometimes becomes hard.

We went on to meet up with another good chavah and work on fixing some electronics in the shul, just a little soldering that's all. Pooling up some knowledge and some skill and some time we were all able to find to make our community a little more beautiful.

I don't know a bracha for working jointly like this. There is no bencher to reach for when three Jews sit and fix AV cables and chat about this and that and make a chore into a mitzvah. It's the sort of thing that just happens, all over shuls all over our country I'd like to think. That doesn't mean it wasn't amazing.

I said to my rabbi, "People loose site of the miracles we have around us. Airplanes taking off and landing on time that's a miracle. Landing men on the moon to see what was there, a miracle." He nodded. "We can do all this," I said, "how about we not kill each other for ten minutes, that would be a miracle." He told me a very good joke on the topic, but I said, "humans are capable of so much when we put ourselves to the task."  And we all have so little time.

Even just a ride on the bus. 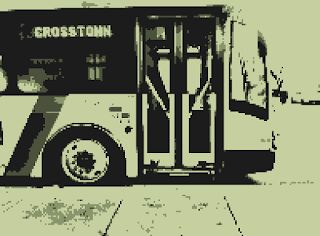 Posted by לְדַרבֵּן at Thursday, December 13, 2018